Seduce Me With Laughter

To me, there is nothing as sexy as laughter. The fact that my first long-term partner was offended by laughter in the bedroom sounded a death knell for our relationship, and the ability to laugh together naked remains one of the things I find most attractive in a partner today. Sex, done right, can be a very serious business, but it can also be extraordinarily funny. That’s why I like to write humorous erotica. I like trying to capture that moment where the gasp of laughter changes suddenly, and shockingly, into a gasp of arousal… or when a cry of orgasm turns into a delighted laugh. 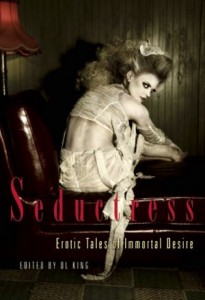 The first time I saw D.L. King, the editor of Seductress, I was attending an erotica reading in NYC, where she read from her anthology, “Carnal Machines.” The story she chose to read was both hot and hysterical, and after I managed to get my disbelief that someone had published a book of steampunk erotica and I hadn’t read it yet (The Horror!), my first thought was, “Oh, she likes funny erotica. I have to write a story for her.” Then she mentioned that she was looking for stories for Seductress, and I turned to my partner and said,”Oh my god! I just had the worst/best idea! I want to write a story called ‘Phone Hex’…. You know, ‘there’s an app for that?'” The look of horror I received in response was all the encouragement I needed. Nothing gets my creative juices flowing like a really bad idea.

I wrote a note down in my idea notebook, and then promptly forgot about it until I noticed that the deadline was approaching. Then, I panicked. I really wanted to write a story about a smartphone app that could be used to summon demons, and I wanted it to be funny, but I had no idea what the plot could possibly be about. Then Ruby showed up in my head, introduced herself, and the jokes kept coming… one after another, just like her victims. (Ruby, for those of you who don’t know, is an object oriented programming language. I thought Perl was a bit too obvious.)

This post is part of the blog tour for Seductress, an anthology of succubus erotica edited by D.L. King and published by Cleis Press

Hey all! I just found out that I’m going to be reading at Say Please night at Between the Pages (formerly Ravenous Nights) on October 5. The event is held from 8-10 PM at the Happy Endings Lounge, and I look forward to seeing many of you there.

“By the Book” is on the Nobilis podcast

This week’s story on the Nobilis podcast is my very own “By the Book.” The story was initially published in the anthology “Like Hearts Enchanted” from Circlet Press.

As I told Nobilis, this is one of my favorite stories. I wanted to write erotica about a “real girl” who finds love in a very unexpected place.

I hope you’ll check it out either as the audio podcast or the e-book. I have another story about love and magic coming out next month in the anthology Seductress from Cleis Press. It’s very different, but I can’t wait to share that one with you as well.

Anyone who wasn’t at the Dirty Queer Sex Tour tonight missed out! There was a room full of insanely sexy women reading insanely sexy stories to other insanely sexy women… and there were cupcakes. What’s not to like? (Well, except not having a sexy woman of my own to go home to… and realizing that I left my copy of the book at home so that I can’t finish reading any of the brilliantly hot stories I heard pieces of tonight.)

If you weren’t there, the Dirty Queer Sex Tour will be stopping in a number of other cities, and I will be joining it again in Boston next Sunday. Come out and see us, and if you want a bookmark – just ask!